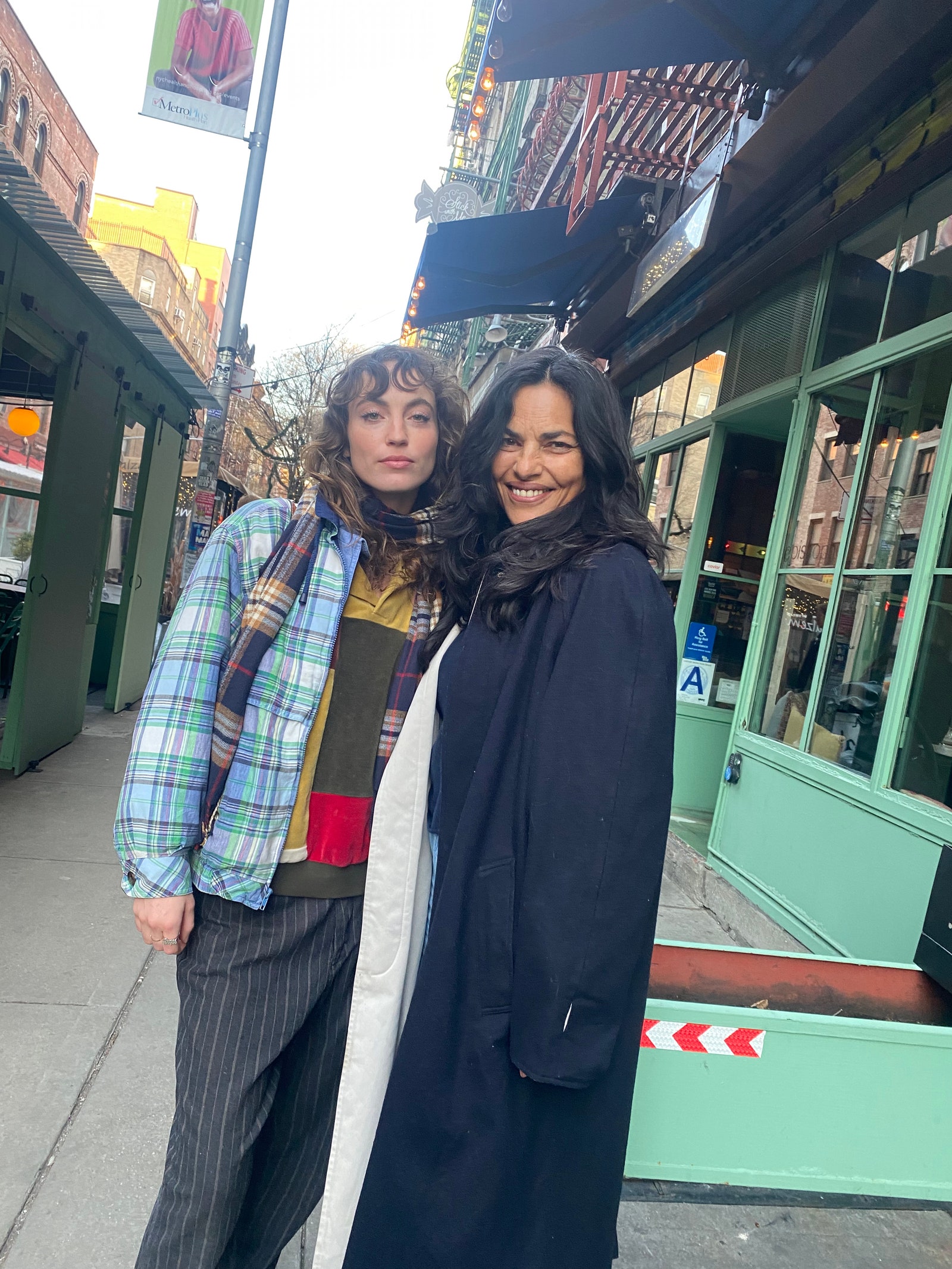 Katerina Tannenbaum was blessed with a lofty name, destined for the spotlight. “Katerina Victoria Tannenbaum,” she tells me at the vintage store Aberzik. “I told my parents, ‘What did you expect from me?’” The regal name suits the actor-model who is best known for her part as Carrie Bradshaw’s impossibly cool (and noisy) downstairs neighbor in And Just Like That…. Her character, a jewelry designer, strolls around the city in diaphanous sheer dresses and mini shorts. In reality, Tannenbaum has more of a tomboy style. The actor is wearing a pair of baggy striped pants, a boy’s rugby shirt, and a plaid zip-up when we meet. From the back, she’d look like any other ruffled downtown skater. “I like to be comfortable and colorful, climb on shit and run around,” she says. “I want to be engaged and say yes. I like the mobility of it all.”

Her loose style is influenced by her childhood in Portland, Oregon. Born to a Russian mother and an American father, Tannenbaum has seven siblings, including five brothers. “I was always a tomboy,” she says, reminiscing about her days running around in nature. (She still likes to go upstate and camp when she has time.) Still, Tannenbaum was a dedicated ballet dancer and participated in theater. “I was always acting and performing,” she says. “I was enamored with New York and always wanted to move here.”

Tannenbaum eventually came to New York at 18, where she studied at the Stella Adler Studio of Acting for a year. After leaving, she met a set of fellow cool kids: models Sasha Melnychuk and Ruby Aldridge and photographer Rebecca Campbell. She fell into the modeling scene and signed with a local agency. Now at Heroes Models, she’s a favorite of brands like Collina Strada.

As for her role in And Just Like That…, Tannenbaum never actually set out to audition for it. Instead, she was directly contacted by the show’s creator, Michael Patrick King, whom Tannenbaum had worked with on the Netflix dramedy AJ and the Queen. For the And Just Like That… role, Tannenbaum assumed the identity of a New York It girl. “My natural state is much less elevated than her, as I’m very mellow. I had to step into essentially being like a girl that dresses up for the city and goes out to places that I wouldn’t necessarily go out to,” she says. “So it’s like putting on the hat of a girl that I know of.”

At Aberzik in the heart of Nolita, it feels like we are shopping for Tannenbaum’s character instead of for the actor herself. The small store, opened last winter by Allison Aberzik and Justin Xavier, boasts curated racks of Jean Paul Gaultier mesh tops and Roberto Cavalli jeans. (Kendall Jenner wore a Jean Paul Gaultier sheer dress from Aberzik a few weeks ago.) While there are racks of designer clothes, Aberzik also sources clothes without labels, which I refer to as hot-girl-vibe clothes or essentially going-out clothes. There is also a rack of independent designers, like Paloma Wool and Priscavera. “We need brick-and-mortar more in the city,” Aberzik tells us as we browse the racks.

It feels very Sex and the City shopping with Tannenbaum, who looks amazing in everything she tries on: a mesh Jean Paul Gaultier skirt-and-crop-top set and a pair of zebra-and-floral-print pants. But what catches her eye is a pair of low-slung, pocketless jeans with “Von Dutch” scribbled on the butt. The jeans feel completely out of Tannenbaum’s signature style—she often goes for a baggy-pants-and-tight-top combination—but she “loves them.” She purchases them, and we are off to grab a snack at Epistorphy, a place that Tannenbaum often frequents.

On the way there, she spots a familiar face taking photos with fans: Sarita Choudhury, who plays the saucy and flirty real estate agent Seema Patel in And Just Like That…. “We sat a lot with each other during fashion month,” Tannenbaum tells me. The two embrace and chat. (I tell Choudury I loved her in A Perfect Murder.) In a way, it seems like the perfect New York day. Or as Tennanbuam tells me later over text: “Honestly, so nice and so Sex and the City,” she says. “New York took us on a little adventure. I love when she does that.”