The First Monday in May has returned! The Costume Institute’s annual Met Gala returned to its typical time slot this week to celebrate part two of the “In America” exhibitions. This year’s red carpet called for gilded glamour; white tie, and celebrities embraced that in a number of ways.

Hosts Ryan Reynolds, Blake Lively, and Lin-Manuel Miranda, as well as chairs Tom Ford and Anna Wintour embraced a literal approach to the theme. Notably, Lively’s Versace gown unfolded from copper to turquoise to mimic the patina that the State of Liberty has undergone over time.

Kim Kardashian went viral when she arrived in Marilyn Monroe’s dress that the late star wore to serenade John F. Kennedy with a memorable rendition of “Happy Birthday.” On site to comment on this look—and many many others—were the red carpet live stream hosts Vanessa Hudgens, La La Anthony, and Hamish Bowles.

But while much of the fun happens on the Met steps, inside the gala is just as interesting. Guests were greeted by a massive sculpture of the Statue of Liberty’s torch in the grand hall, and then treated to a performance by Lenny Kravtiz. See you next May. 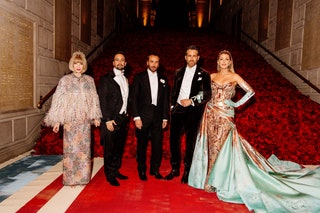 A few of the honorary chairs and hosts of the evening: Anna Wintour, Lin-Manuel Miranda, Tom Ford, Ryan Reynolds, and Blake Lively. 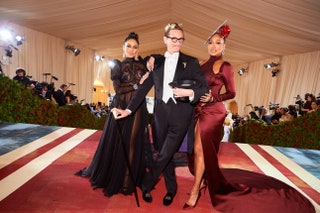 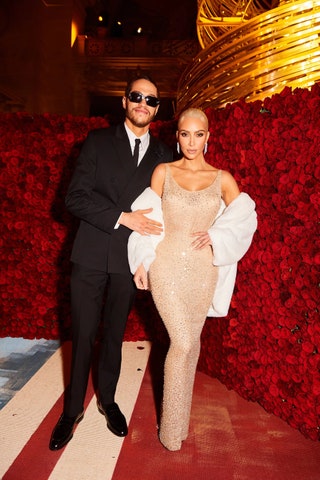 Pete Davidson and Kim Kardashian in the Marilyn Monroe dress (or perhaps a replica; she changed at the top of the Met steps to preserve the original garment). 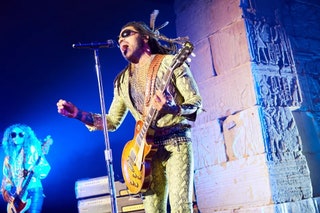